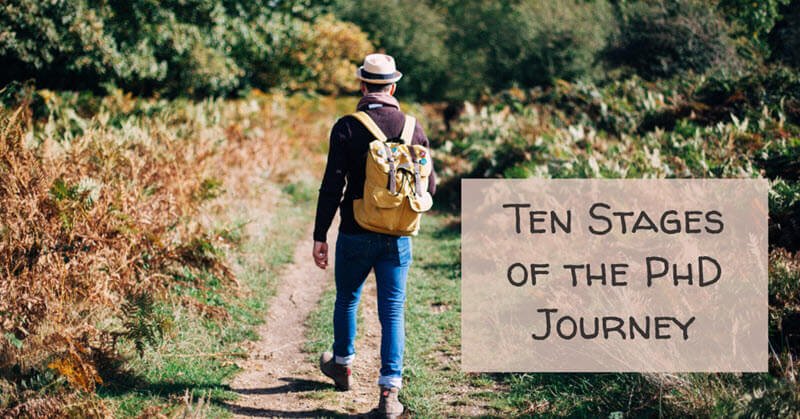 Designing, executing and writing up a PhD study takes a large chunk of your time and energy. Here is an overview of each stage of the PhD journey, along with links to excellent articles that will help you along the way. Some of the advice offered here may be specific to a discipline, country or university, or may be heavily dependent upon some author’s experience and background. Nevertheless, you are likely to find most of this advice and instruction helpful.

1. Consider what you hope to achieve by completing a PhD

It is important to seriously consider why you are undertaking a PhD and what you hope to achieve by completing a PhD. Completing a PhD can be extremely useful even for those who may not continue doing research later on.

*   9 things you should consider before embarking on a PhD by Andy Greenspon
*   Familiarise yourself with the Australian Code for the Responsible Conduct of Research
*   A successful PhD student will be expected to possess key research skills and knowledge as listed here: Research degree graduate qualities by the University of South Australia.

You might be offered a PhD project where the research proposal is already planned or you might need to devise a research proposal yourself, either before or after you have chosen a supervisor. This proposal and confirmation of candidature will need to be approved by your university’s research committee.

Some students have one key supervisor with one or two additional supervisors, while it is not unusual for some students to have three or four. It is important to remember that your supervisor may have many students under their direction, so their time may be strictly limited. At Monash University, research supervisors receive accreditation training.

An essential project management skill when conducting research is the ability to effectively design and manage research budgets. If you need to request finances through a grant application, ensure you thoroughly investigate the necessary guidelines.

*   Organisation and Budgeting by the NHMRC.
*   How to make a simple research budget by Jonathan O’Donnell

5. Start writing in the early stages of your project

Don’t wait until you have collected and analysed your data before you start writing. Most universities encourage students to write about their project while they are conducting their research. Project proposals can be rewritten and methods sections developed as data is collected and analysed. Literature reviews can be updated and conference talks and posters can be prepared even before you have started to collect data.

6. Consider the structure and the format of your thesis

How to find completed PhD theses

It is always a good idea to check other PhD theses that are similar to your topic, have been completed recently and have been produced by your university department. You can gain a wealth of ideas about structure, size and overall thesis design.

And on this page, there are other useful inks:

How to write a literature review

Reviewing the literature is important to assist your knowledge and understanding of your topic and integral to establishing your position in the academic landscape. Writing good literature reviews is crucial to show your examiners how well you know the literature and how well you are able to explain the importance of your project. It is a common requirement that you write a separate chapter as a stand-alone literature review. However, for those theses that are predominantly composed of complete published papers, there might not be a requirement for a separate review section.

7. Get feedback on your writing

In addition to your supervisor, seek feedback on different aspects of your writing from appropriate advisors: accuracy, clarity and brevity. Increasingly, projects are written for a variety of aim to get academic audiences so ensure that your writing is clear and succinct.

8. Learn how to publish peer-review papers

Increasingly, students are expected to submit a large proportion of their thesis as published papers. Not every PhD project can be easily prepared as separate papers; however, remember to look at recently submitted theses within your discipline and within your department to see how people have completed their thesis.

*   What is a ‘thesis by publication’? by the University of Sydney
*   Six Misconceptions about the Three-Paper Route by PhD Life

The process of submitting your thesis may include preparing additional tasks and preparation of paperwork (i.e. the Originality Statement).

If there are any problems...

Most problems with your project are surmountable and remember that your supervisors and your university are there to help you. If things go drastically wrong at any time, it is essential that you seek assistance as early as possible. There are people within your university administration who are there to help you. To help dealing with problems, document any issues as they arise. It is essential for you to have excellent time-management and record-keeping skills.

*   Be aware of, and develop, sound project management skills including risk management protocols to identify alternative actions in unforeseen circumstances.
*   Keep records and extra copies of everything: for example, data, thesis drafts, email, meeting agendas, fieldwork notes. Ensure you have excellent electronic version control of your documents and extra backups of all your data and work.
*   Ensure you develop and maintain a support network of friends and colleagues who may give important advice and help you deal with any obstacles.
*   Get plenty of exercise, rest and sleep. 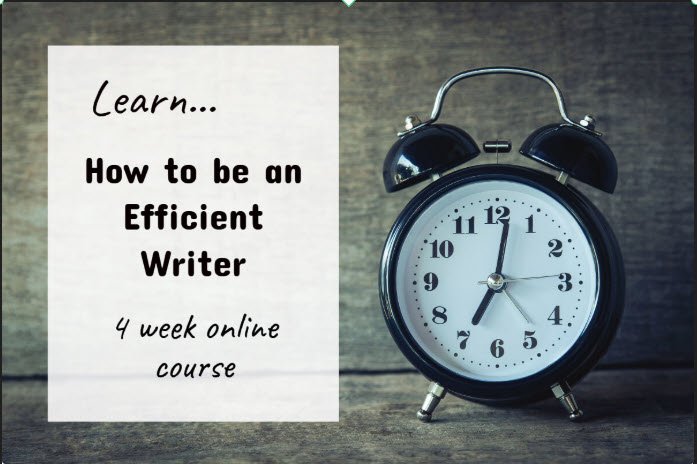 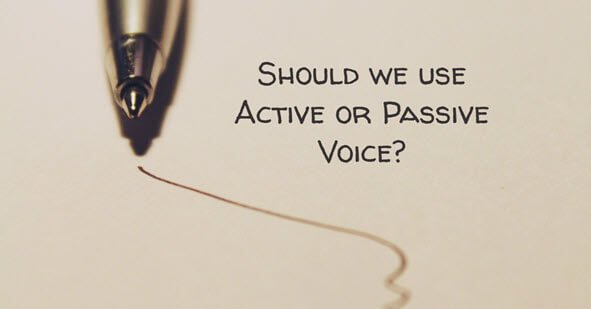 The traditional criticism of active voice

Traditionally, science and academic writers were strongly advised to use passive voice in order to maintain objectivity. However, this view is based on the criticism of using the first person (‘I’ or ‘my’) in that an individual’s view or perspective was considered biased. For example, the proponents of the passive voice in science writing claim that the active construction “I observed the behaviour.” presents a subjective view, while the passive construction “The behaviour was observed.” presents a more objective perspective. Some also argue that the use of personal pronouns in science and academic writing gives the impression of stating an opinion. However, active voice is not governed by the use of personal pronouns. You can write in passive voice while using a personal pronoun. For example: “I was photographed by my friend”.

What is meant by ‘voice’?

In simple terms, ‘voice’ refers to the relationship between the subject and the verb.

How to identify active voice

Active voice is when the grammatical subject performs the action specified by the verb.

Active voice: “I produced ten surveys.” The subject is the person “I” who performs the action “produced”.

How to identify passive voice

Passive voice is when the grammatical subject of the sentence is receiving the action specified by the verb. Passive voice always has the verb form ‘to be’ followed be a past participle. ‘To be’ verbs include: ‘is’, ‘are’, ‘am’, ‘was’, ‘were’, ‘has been’, ‘have been’, ‘will be’, ‘will have been’ and ‘being’. They are also known as linking verbs. A past participle is a past tense verb that often (but not always) ends in ‘ed’.

Passive voice: “Ten surveys were produced”. The subject is the “surveys” that receives the action “were produced”. In this sentence, the reader does not know who or what produced the surveys.

Passive voice with an object: “Ten surveys were produced by me”. In this example, the object of the sentence specifies who (or what) performs the action (me).

The criticism of passive voice

The insistence that writers should always avoid the personal pronouns (or the first person) has lessened and the use of active voice is increasingly encouraged. Key criticisms of passive voice are that the reader does not know who or what was responsible for the action described in the sentence and that passive sentence constructions are often wordy and vague.

Both types of voice are necessary for good, clear writing

Whether you use active or passive depends upon what you are writing and what you need to focus on.

1. If it is necessary to specify who or what performed the action

Without adding an object identifying the performer of the action, passive construction can make it difficult to know who did what.

If a sentence is to remain passive, a citation might be necessary to let the reader know who did the investigation.

2. If it is necessary to focus on the action itself

The following example is from the methods section of a recent research paper, which uses both passive and active voice. Here the focus is on what was measured, determined, distinguished and compared. Continual reference to who did the measuring is not necessary.

3. If the person or thing responsible for the action is unknown

Passive: “The car was stolen.”

Active: “Somebody stole my car.” 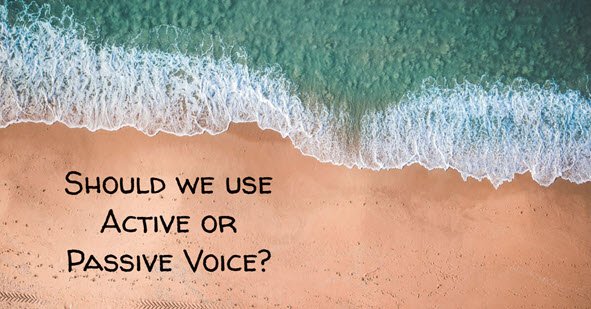 4. When explaining cause and effect

Passive: "Most malaria cases are caused by the parasite Plasmodium falciparum".

Active: "The parasite Plasmodium falciparum causes most cases of malaria".

5. If it is necessary to deliberately avoid specifying authorship

Some government departments, consultancies and corporations produce documents where acknowledgement of individual authors is deliberately avoided. This might occur when documents are designed to represent the organisation in its entirety or when a variety of different authors design, write and update documents.

- Passive: “The remediation program was initiated in early 2015”.

In these cases, the third person (we) may be used to collectively represent the organisation or institution.

6. If changing voice will make your writing more concise

If you do not need to specify who did what, your writing can be more concise.

- “We found that an increase in production rate was caused by increasing the length of the probe.” (16 words)

- “An increase in production rate was caused by increasing the length of the probe.” (14 words).

- “Increasing the length of the probe caused an increase in production rate.” (12 words).

Past tense: "The problem was investigated by me".

Present tense: "The problem is being investigated by me".

Future tense: "The problem will be investigated by me".

Past tense: "I investigated the problem".

Present tense: "I am investigating the problem".

Future tense: "I will investigate the problem".